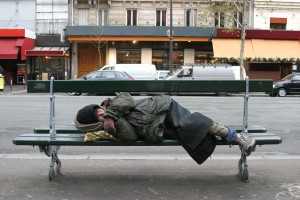 I have been privileged over the last couple of years to get to know Mike Neels. He is a church planter. God has laid on hisheart to plant a Calvary Chapel church in the city of St. Catharines, Ontario, about an hour from where I live, in Oakville, near Toronto. Specifically, Mike is on mission to serve the poor. Here’s part of his story.

I want to start this off by saying that I’m new at this. I’ve never planted a church before. I don’t have a clue what I’m doing. I’m thankful that I’m surrounded by some great mentors and coaches and I’ve received inspiration from those who have gone before. In fact, this past Saturday was the first time the little core group that have come around me and “caught the vision” have gone out into the community and held a church service. However, I feel like Martin Luther as he wrote to Pope Leo X defending his Ninty-Five Thesis, “necessity compels me to be the goose that squawks among the swans.”

Last Saturday my core group and I held a church service and supper for the community and homeless in our city, St. Catharines, Ontario. Our city is the worst in Canada when it comes to the job market. There is one hundred job seekers for every job posting. People are broken and hurting, helpless and life has beaten them down. We had 20 people show up and enjoyed singing praises to our Savior with them, hearing from God’s Word together, and eating with them. It was an awesome experience of witnessing Jesus at work among those who he came to save.

I’m not saying that I’m so good or perfect or have all the right answers. In fact, I worked for six years at the largest Calvary Chapel in Africa, Calvary Chapel Kampala. I taught at the Bible College and eventually took over as Director. I was the Operation Manager of one of our multi-site locations. Even with all the “work|” I was doing for Jesus, I still didn’t get it. Every day on my way to work I would walk past the same beggars on the side of the road. I didn’t lend a hand. I didn’t bring food to them or money or medical attention. I was too busy doing Jesus’ work. There were too many of them.

I used excuse after excuse, all the while forgetting that Jesus came for them. In Matthew 25 Jesus reminds us that one day he will sit in judgment, dividing the sheep from the goats. Those on his right hand he welcomes into the kingdom because they fed Jesus when he was hungry and thirsty, visited him when he was sick and imprisoned. They were surprised because they never fed Jesus or gave him drink, or visited him. Jesus says, “in as much as you have done it to the least of these my brothers, you have done it to me.”

Throughout the Old Testament, Jesus made cameos as “the angel of the Lord.” This first time he does this isn’t to someone rich or famous. He didn’t show himself to someone strong or doing great things for him. In Genesis 16 he appears for the first time to Hagar. Hagar was Sarai’s servant girl from Egypt. She was used by Abraham to try jump start God’s promise of offspring and a nation. She was abused by a jealous Sarai and eventually fled into the desert. It was here and to her that Jesus first appears. He listens to her, comforts her, and lets her know that everything is going to be ok. Jesus cares so much for the poor, the downtrodden, those whom this world has eaten up and spit out.

Shouldn’t we use our church plants to reach such people? Shouldn’t we reach those to whom Jesus would appear if he was here today? In fact, Jesus is here today in us, his church. He has given us his great commission to go into all the world and make disciples. Let’s not let him down. Let’s do his work by reaching those who he would reach. Let’s make it our goal to go to those who nobody else wants to help. Let’s hear him say to us, “insomuch as you have done it to the least of these my brothers, you have done it unto me.”

You can connect with Mike and learn more about how they serve the poor and make disciples by visiting their Facebook page: Redeemed at Calvary.