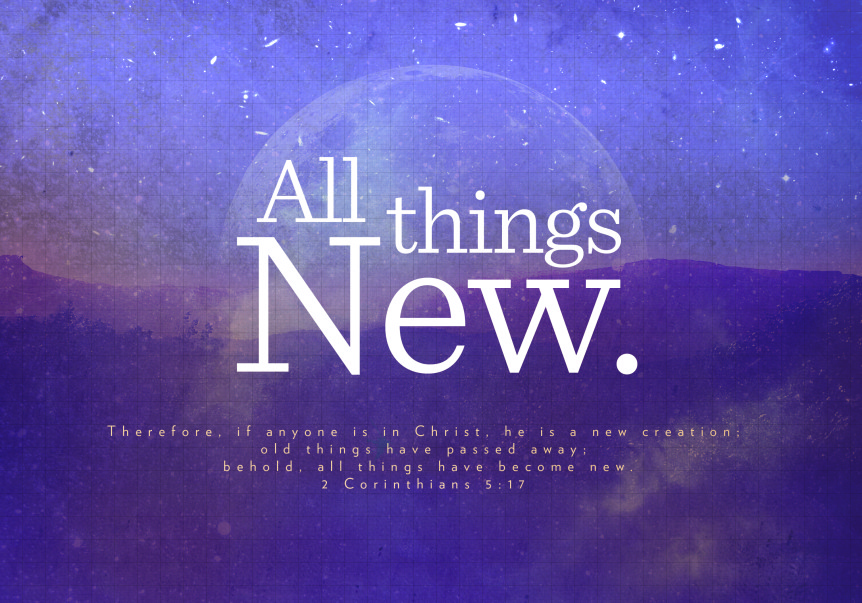 Christianity is all about NEW BEGINNINGS.

2 Corinthians 5:17 says it wonderfully: “If anyone be in Christ, he is a new creation. The old has gone, and the NEW has come.”
Through the power of God, you and I can be forgiven and begin a new life.
Forgiveness always brings newness; for the Christian, every day can be a NEW YEAR type of day.

Technically, New Year’s Day is no different from any other day in the sense that it is a 24 hour period marked by the rotation of the earth around the sun. But holidays can be significant, both culturally and biblically. With the arrival of 2016 I thought it would be interesting to take a look at New Years’ Days in the Bible.

Although we don’t see the words “New Year’s Day” in the pages of Scripture, we do see this phrase: “the first day of the first month”. Interestingly, we see it eight times.

It is possible to read TOO much into the numbers in the Bible. But any good Bible student can see that certain numbers do have significance, among them seven, twelve, and forty.

For example, the Israelites wandered in the desert forty years. Jesus was tempted forty days. There are twelve tribes of Israel, Jesus had twelve apostles. God created the world in six days and rested on the seventh. The number seven, which is the number of completion, appropriately occurs over and over in the book of Revelation.

If nothing more, “the first day of the first month” occurring eight times in Scripture points us to the God of new beginnings.

Here are the eight “New Year’s Day” occurrences in the Bible.

“And it came to pass in the six hundred and first year, in the first month, the first day of the month, that the waters were dried up from the earth; and Noah removed the covering of the ark and looked, and indeed the surface of the ground was dry.” (Genesis 8:13)

The first “New Year’s Day” mentioned in Scripture is referring to Noah’s 601st birthday. He was on the ark, the water had begun receding. It was a time to remember God’s faithfulness. The first thing Noah did when he got off the ark was to build an altar. That’s worship.

As you begin a new year, remember that God is and always will be faithful, and so you can and should worship Him.

“On the first day of the first month you shall set up the tabernacle of the tent of meeting.” (Exodus 40:2)

In Exodus one, God’s people were slaves. By the end of Exodus, they were a free people. And God told them to set up a tabernacle, a place to meet with Him.

Our tabernacle today is our quiet time. It is that time that we take to get away and meet with God. Like the Israelites, we were slaves and we have been set free.

Set up a “tent of meeting” in your life; a daily time of meeting with God.

“And it came to pass in the first month of the second year, on the first day of the month, that the tabernacle was raised up.” (Exodus 40:17)

It took God’s people a long time to get the tabernacle set-up.

Maybe it has taken you a long time to get a place of meeting set up in your life. You’ve tried and tried. But you’ve failed.

Dear saint, the Lord loves you! Continue on, and by His grace, don’t give up. He wants to spend time with you. Get a plan and seek Him first.

This of course, is an event during the reign of King Hezekiah.

King Hezekiah’s dad, King Ahaz, was a man who was “increasingly unfaithful to the Lord.” The Bible says, tragically, that he encouraged moral decline in Judah.
We even read that King Ahaz would sacrifice his own children by burning them in the fire!

So when he died, his son, Hezekiah became King and had a big mess to clean up. The house of God was in ruin.

In 2 Chronicles 29, we have the account of his reign.

One of the first things that he did was to repair the doors to the house of the Lord. He made God’s house a priority. He made a resolution. It wasn’t a resolution to lose weight, to get fit, or to get organized. His resolution was to enter into a covenant with the Lord.

““Now it is in my heart to make a covenant with the Lord God of Israel, that His fierce wrath may turn away from us.” (2 Chronicles 29:10)

“It is in my heart” could also be translated “I am fully resolved….”

His New Year’s resolution was to lead his people back into a relationship with the Lord.

He’s saying, “Let’s make God’s house a priority. Let’s get back to worshipping together as a family and as a nation. Let’s dust off our bibles. Let’s commit to a church. Let’s restore worship in our lives.”

With Hezekiah we see a New Year bringing a focus on sanctification and restoration in the Lord’s house. The New Year for Ezra meant taking advantage of a new ministry opportunity.

God’s people messed up (again!) Because of their sin, they were taken captive to Babylon. After 70 years, the way was opened for them to go back to Jerusalem. Thousands of Jews already had moved back.
Ezra was a priest, a scribe, and a teacher. Finally, In 458 BC, he packs up and joins them in Jerusalem.

He probably had a great ministry in Jerusalem. It’s interesting to me that he left on the first day of the first month. It was a time of change.

Maybe in the New Year God is calling you to change how you are serving him. With change often comes a new passion, new ideas, and stronger commitments. If your service to God has become stale, don’t stop serving, maybe it’s just time for a change. Pray about it and talk to a leader at your church.

“By the first day of the first month they finished questioning all the men who had taken pagan wives.” (Ezra 10:17)

In Ezra chapter nine, we see that the people made some bad decisions regarding their marriages. This affected Ezra so much so that he fasted and prayed, and tore his garments.

Listen to part of his prayer: “O my God, I am too ashamed and humiliated to lift up my face to You, my God; for our iniquities have risen higher than our heads, and our guilt has grown up to the heavens.” (Ezra 9:6, NKJV)

He was weeping and praying, and so grieved that the people had made these terrible marital choices.

Here’s an application for us. For those who are married, as we go into a new year, ask yourself this question: Is there anything that you can do to improve your marriage?
If you are not sure of the answer to that question, ask your spouse!

“And it came to pass in the twenty-seventh year, in the first month, on the first day of the month, that the word of the Lord came to me, saying…” (Ezekiel 29:17)

“God, who at various times and in various ways spoke in time past to the fathers by the prophets, has in these last days spoken to us by His Son…;” (Hebrews 1:1–2)

Do you know that God can speak to you? The primary way that God speaks to us today is through the Bible.

Are you being encouraged by the Lord? Is His word speaking to you? We live in a day and age where there are so many books, sermons, articles, videos, and podcasts. But all of these things can squelch the voice of the Lord.

The Word of the Lord came to Ezekiel no doubt because he was listening. In this new year, let’s make sure we take time to listen to the Lord.

The last time we see New Year’s Day mentioned in the Bible is in the book of Ezekiel.

“‘Thus says the Lord God: “In the first month, on the first day of the month, you shall take a young bull without blemish and cleanse the sanctuary.” (Ezekiel 45:18)

For every picture in the Old Testament, there is a principal in the New Testament. And this picture of a bull being sacrificed is a reminder that Jesus shed his blood to provide forgiveness for our sin. All through Old Testament God’s people were supposed to offer animals as sacrifices reminding the people that without the shedding of blood there can be no forgiveness of sin.

There is no greater sacrifice than that of Jesus. He laid down His life for us. He came that we might be forgiven.

Let every New Year for the rest of our lives, and all eternity carry with it the reminder that Jesus died for our sin. The greatest sacrifice, the greatest joy, the greatest message, is that of forgiveness. With it, comes a new beginning.

May you have a great year in Jesus!

What about you? What is it about the new year that you are looking forward to? Share in the comments below. Would love to hear from you!