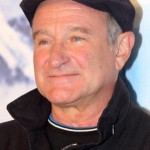 They were probably the first words I heard Robin Williams say. My family used to watch Mork and Mindy when I was a kid. I think it was on Tuesday nights.

It’s an odd thing, as an adult, to read about the death of an actor that you followed as a child. You feel, well, not like you know them, but like there was some type of familiar… bond, no, bond is not the right word…

My heart breaks for his wife, Susan Schneider, and his children. How empty and hurt they must feel; the pain must be unimaginable. We would do well to pray for them.

Apparently, he struggled with severe depression days before his death. The coroner suspects it was suicide by asphyxiation. (source)

Death is the great equalizer. Every man and woman, sooner or later, will die. Everyone will stand before Christ and be judged. (2 Corinthians 5:10).

There is life after death.

That is the key that brings eternal life: living and believing in Jesus. It is a simple plan: to trust in the One who conquered death.

Have you prepared for your eternal future? If you have questions, or need prayer, comment below or click here to send me an email. It would be an honour to serve you.